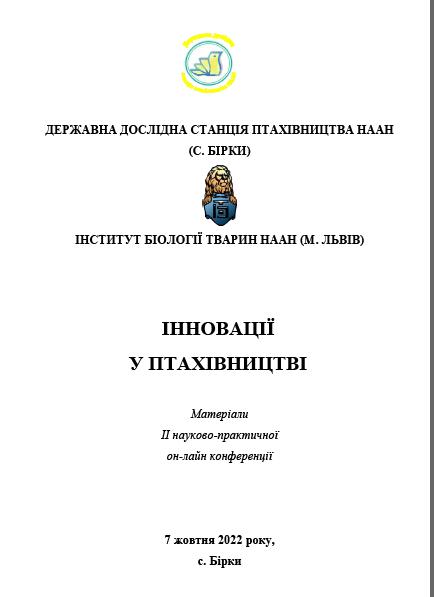 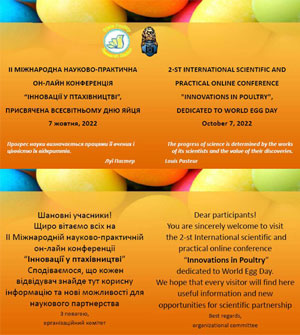 National University of Life and Environmental Sciences of Ukraine

The development of animal genetic modification systems has made it possible to use protein production systems to produce biopharmaceuticals in large quantities (e.g., cattle milk and from poultry eggs). There are transgenic rabbits, sheep, goats and cows that produce biopharmaceuticals in their milk [1, 2]. The first drug produced in transgenic animals, antithrombin III in goat milk, was approved for use by the European Medicines Agency in 2006 and by the FDA in 2009 [3]. However, there are limitations to the use of large mammals as bioreactors. They have long gestation periods. They require large amounts of space and feed, which can make industrial expansion difficult and expensive. Purification of recombinant protein from milk can also be difficult because of the high lipid and other protein content [4].

However, poultry is a promising bioreactor due to its egg production, short intergenerational interval, and ability to posttranslational modification of proteins. Despite the difficulties in the technology of creating transgenic poultry, transgenic lines have been created that have produced biologically active proteins used in the treatment of various diseases. For example, the recombinant protein drug Kanuma (selipase alfa) by Alexion Pharmaceuticals derived from the egg protein of transgenic chickens (Gallus gallus). The production of this drug was related to the nature of its glycosylation. It is approved for the treatment of two forms of lysosomal acid lipase deficiency (Wolman disease (LAL)) and cholesteryl ester storage disease, which can cause liver fibrosis, liver cirrhosis and finally liver failure [3]. The need to develop such drugs is due to the fact that liver diseases are massive. After the age of 40, the diseases often get worse. The most common treatments are pharmaceuticals, surgery, and therapeutic diets. today more than 20 pharmaceutical preparations obtained in bioreactor eggs were approved for use [5].

Among dietary foods for liver disease, foods rich in vitamin B12 are most often recommended. Poultry eggs lead the way in this regard in several ways. They are a good source of many vitamins, minerals, folic acid, and omega-3 fatty acids. Recently, transgenic chickens and quail have been created and used as bioreactors to create proteins of pharmacological value. The creation of transgenic ducks is promising because duck eggs are larger than chicken eggs and richer in vitamins and omega-3 fatty acids. Ducks are not inferior to chickens in egg productivity.

Thus, our goal was to develop a transgenic duck design to produce functional products enriched with additional protein. Initially, green fluorescent (EGFP protein) was chosen. The method used was CRISPR/Cas9-mediated homology-directed repair to edit the duck genome. Three methods were used to introduce the transgenic construct: transfection with sperm, direct injection of DNA, and creation of transgenic germinal chimeras.

Transfection of spermatozoa with lipofectamine followed by artificial insemination was used to deliver the transgene into the host genome. Twenty-four Shaoxing ducks participated in the experiment. We used 4 plasmids: pX330 (containing the Cas9 gene), pBR322-sgRNA1 and pBR322-sgRNA2 (containing sgRNA spacers), and pBR322-HDR-EGFP (encoding the EGFP gene sequence). In the first generation, 31 ducklings were obtained, 61% of which had transgenic DNA in their genome [6].

As a result, poultry were obtained as bioreactors to produce eggs that carry recombinant proteins in their composition. Next it is expected to use the CRISPR / Cas9 method to produce birds whose eggs will contain pharmaceutical proteins.